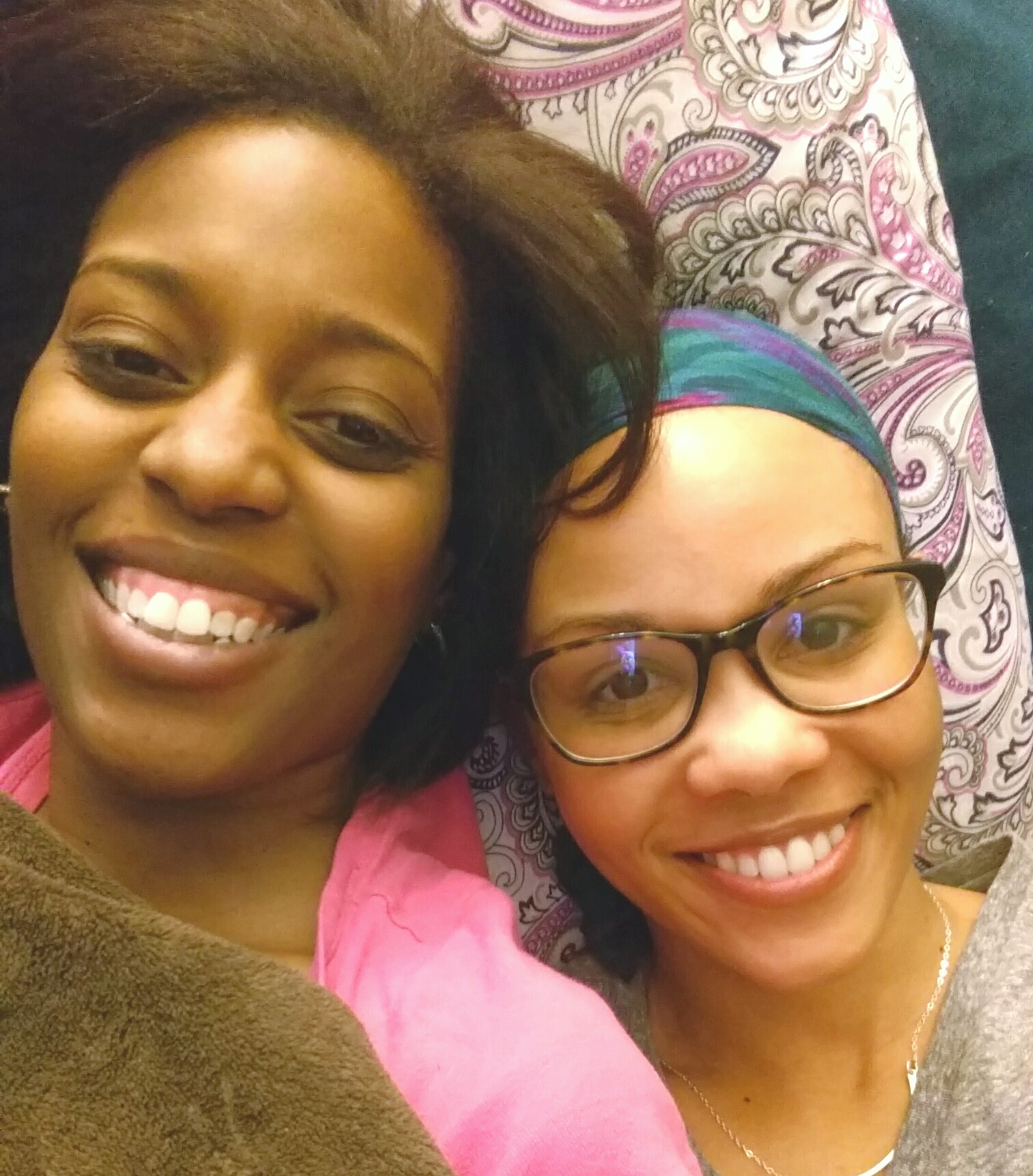 Young Black women get cancer too! I’m honored to ink this laugh-cry-laugh-cry story of Chellese Parker and Iman Perry to tell you how it is…

The fact that their table was the only one with a grip of young POC cancer patients at CancerCON, made me ask to join them – for all the same reasons why Black kids in elementary school sit together in the cafeteria. Being a brown-skinned Asian woman, I appreciated the melanin.

After seeing that the situation was so white at the largest national conference for young adults with cancer, Chellese Parker and Iman Perry took to socials with the conference hashtag and started liking pics posted by POCs at the conference, who subsequently liked them back, and later linked up with them at the meet and greet.

“We did that on purpose,” said Chellese. “Being Black girls is a big part of who we are. Pride in our culture, relishing that, and Black girl magic is abundant in our circle of friends.” 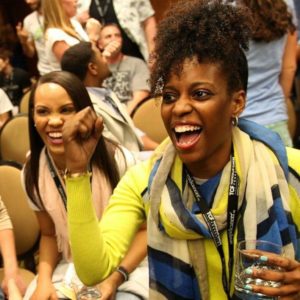 Admittedly, most of us had no idea that the world of young adult cancer advocacy (a.k.a. AYA cancer) would be so white until we arrived. “I know that Black people get cancer, and that cancer doesn’t discriminate. So, I didn’t think that POCs would be so scarce,” said Chellese. “People of color need each other in a way that I don’t know if white people need? And maybe they don’t need each other, because they already have each other. So, it’s not on their radar.”

We bounced around our names, diagnoses, stories about being young racially minoritized cancer patients, and how we got ourselves there – to CancerCON – where most patients of color were not. We held it down.

“I have a problem with the word survivor,” Iman said, when we started talking about all the cancer survivor, thriver, fighter, etc. labels that put a militant or way positive spin on being a cancer patient. Iman explained that she wasn’t a survivor, that she’s still struggling, and that it’s not because she’s doing anything wrong. Also, patients who get to claim remission aren’t doing anything right either. Ain’t that the truth.

Chellese describes Iman as a smarter than smart go-getter, who pushed her to attend CancerCON. Iman had told her, ‘I’m going to do this thing, and it’ll be good for you, so I’m going to make sure it’s free for you. Just come.’ Iman ended up winning a top prize for fundraising, which included free CancerCON attendance for herself and a friend—Chellese.

“Her pushing me in that direction was no accident,” Chellese said of her amazing best friend. Since then, Chellese has become more involved in cervical cancer advocacy.

Chellese Parker and Iman Perry are an unlikely story. Presidential scholars at Hampton University, who became fast friends during their freshman year living in the honors dorm. They shared a love for Jean-Michel Basquiat, the highs and lows of early career changes, and the joy of welcoming Chellese’s baby girl into the world… all before both being diagnosed with cancer as young adults.

Iman wasn’t diagnosed until July 2014, but Chellese believes her friend may have been presenting symptoms as early as 2007. Because of her age, Iman wasn’t promptly screened for colorectal cancer. Her doctors checked her for everything but that. Iman’s digestive issues persisted for many years before a colonoscopy was finally performed to rule out cancer, and resulted in a diagnosis of colorectal cancer.

“We didn’t think she had [colorectal] cancer either,” Chellese said. “Her being so young and presenting with those symptoms … I just think her age really worked against her.”

As for their contrasting temperaments as patients, Iman was all about planning ahead and researching everything she could about her cancer and its treatments, but Chellese preferred dealing with things as they came up. “I didn’t realize what a difficult patient I was until I saw what a good patient she was,” laughed Chellese. “I wanted people at the hospital to get out of my room and leave me alone, but she was the opposite. Everything they would ask Iman to do, she tried.”

When Chellese was diagnosed with cervical cancer, Iman stepped up to take care of her friend. Through the thick of surgery and recovery, she stayed with Chellese at her house and in the hospital, taking charge to anticipate Chellese’s needs and remind her of what makes her happy. She also told their friends how to be supportive of Chellese.

“Telling people you have cancer is really hard,” Chellese said. “She was always there to talk to people for me, in a way that I didn’t know I needed.”

According to Chellese, the most important difference between their cancers is that she never felt her life was threatened, whereas Iman’s mortality was constantly looming.

“Thinking about cancer from the perspective of ‘I need to get past it. I’m a single mom. Let’s not be sick anymore.’ is very different from being fearful that you’re not going to make it,” Chellese explained. “For Iman, as she was learning everything that was going on with her, everyone kept saying that she might not make it. So, Iman processing her cancer was vastly different from how I processed my cancer.” 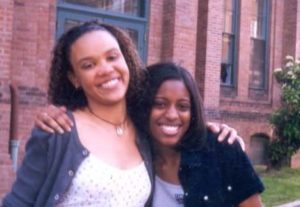 This humble respect for the major difference between their cancer diagnoses was something Chellese never lost sight of. She tried to give Iman advice and information about the experience of cancer when she could, but she never felt like they had the same experience.

“I never thought that I was going to die, but it was different for Iman,” Chellese said. “She kept saying, ‘I just want to live to be 40.’”

The last two weeks of Iman’s life were spent in the hospital at Georgetown. Chellese lives three hours away, but made that drive several times because she loved the sh*t out of that girl, and would follow her to the end of the world. There was never any question about it. But as hard as it was to be there and watch her soul mate suffer, it was harder not to be there because of the fear of missing something.

“I now realize that when I was sick, Iman was doing all the things for me that she was going to need from me later,” Chellese said. “And so, I found purpose in my own illness by being there for her.”

Iman’s hospital room was full of people who adored her, including friends from Hampton University who had flown in to see her. She was a genuinely caring person, who showed up for so many of her friends during their past challenges.

The night that Iman passed, she still had her personality,” Chellese said. She didn’t want to be fussed over. “But she was anxious. She always had a plan and she was afraid.”

“I was there holding her hand when she took her last breath,” Chellese said.

Chellese has always felt a bit of survivor’s guilt. “I feel very blessed and guilty at the same time. Blessed that I still have a chance, but guilty because I don’t get to share that with Iman.”

She still grieves the loss of her best friend. “It really hit me on my cancerversary last December, because it was something that Iman always made a big deal about for me,” Chellese said. For example, when Chellese hit her five-year no evidence of disease (NED) mark, Iman planned a spa day for her. She didn’t want to piss on Chellese’s parade and have her own illness overshadow this triumph. But Chellese didn’t want to rub her celebration in Iman’s face either.

“F*cking facebook always reminds you of sh*t!” Chellese said of her most recent cancerversary. “It snuck up on me and kicked me in the stomach this year. I lost it.” 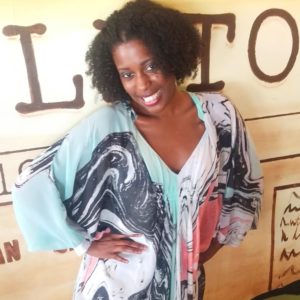 “She’s still with me all the time, and I think of her a lot. I still text her sometimes,” Chellese stated matter-of-factly. “But you have to carry on, and I know Iman would have wanted me to enjoy my life. She really wanted to enjoy hers.”

Chellese holds the profound notion that having Iman as her friend makes her a better friend to other people, and that giving back that kind of love to other people is the best way to honor Iman.

It’s unfair AF that Iman Perry died from colorectal cancer. We will not let her life go uncelebrated, and we will respectfully share her story and continue her advocacy so that other young people with symptoms of colorectal cancer will be diagnosed sooner and saved.

If you appreciated this story, you are invited to join the author in making a donation to a scholarship at Hampton University established by Iman’s friends. To donate CLICK HERE. Select Designation of My Choice –> Other Endowed Scholarships and specify “Iman E. Perry Endowed Scholarship.” Thank you.

Published in Elephants and Tea Magazine.